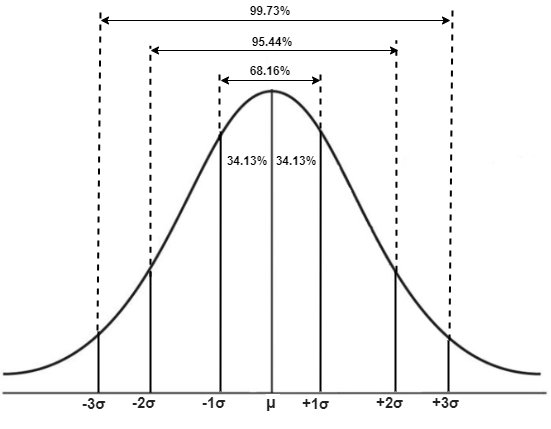 In this post we will get into detail of understanding Z-Score and what are its application with respect to Gaussian/Normal distribution . We will also discuss about Quantiles and implement it to see how a particular distribution is divided into different Quantiles.

If we try to understand about Z-score in layman language, then it basically shows about how far is a data point away from the mean.

If we try to understand it in a more technical way, then it states how many standard deviations above or below the mean is a particular value present.

The curve shown above is a Gaussian or Normal Distribution curve. The central portion of the curve is the Mean.

Similarly, for a Z-score of -1, says that we are 1 standard deviations below the mean.

Z-score of -2, says that we are 2 standard deviations below the mean and so on.

The Z-score formula for a sample would be as follows:

Now, let’s take an example to understand this concept better. Suppose we are considering the heights of student in a class. Let’s say the mean height of the students are 150 cm and the standard deviation is 10 and we have to find the probability of students who have heights greater than 165 cm –P (height >165cm)

So, if you take the above curve and try to map it out to a standard normal distribution curve then the value of 165 cm would fall 1.5 standard deviations above the mean.

Using the Z-score table below, if we see the score for z which is 1.5 in our case, the corresponding value for that 0.9332 (circled in red) which means that the region of the curve which is less than  165 cm is 93.32% of the whole curve as shown below.

The probability of students in the class whose height is more than 165cm is around 6.68%

Z-score for One Sample

In the above example, we had considered the complete population.

To calculate the z-score for one sample as well. The formula for that also remains the same:

The process for solving the z-score remains the same for samples.

Now that we have seen, the formula for calculating Z-score for one sample, let’s go ahead and understand how we could do this when we have multiple samples.

The below formula would give the z-score when we have multiple samples.

Let’s take an example: The mean weight of students in a class is 150lbs with standard deviation of 3.0. What will be the probability of finding a random sample of 60 students with mean weight of 170lbs assuming the height is normally distributed.

So, as we are dealing with the sampling distribution of means, we had to include the standard error in the formula while calculating the z-score.

Another thing that we need to keep in mind here as well is the empirical formula that we discussed earlier.

Now that we have understood the concept of Z-score, let’s go ahead and see how we could implement it to detect Outliers.

We would also see another method of detecting Outliers which is through Using Quantiles.