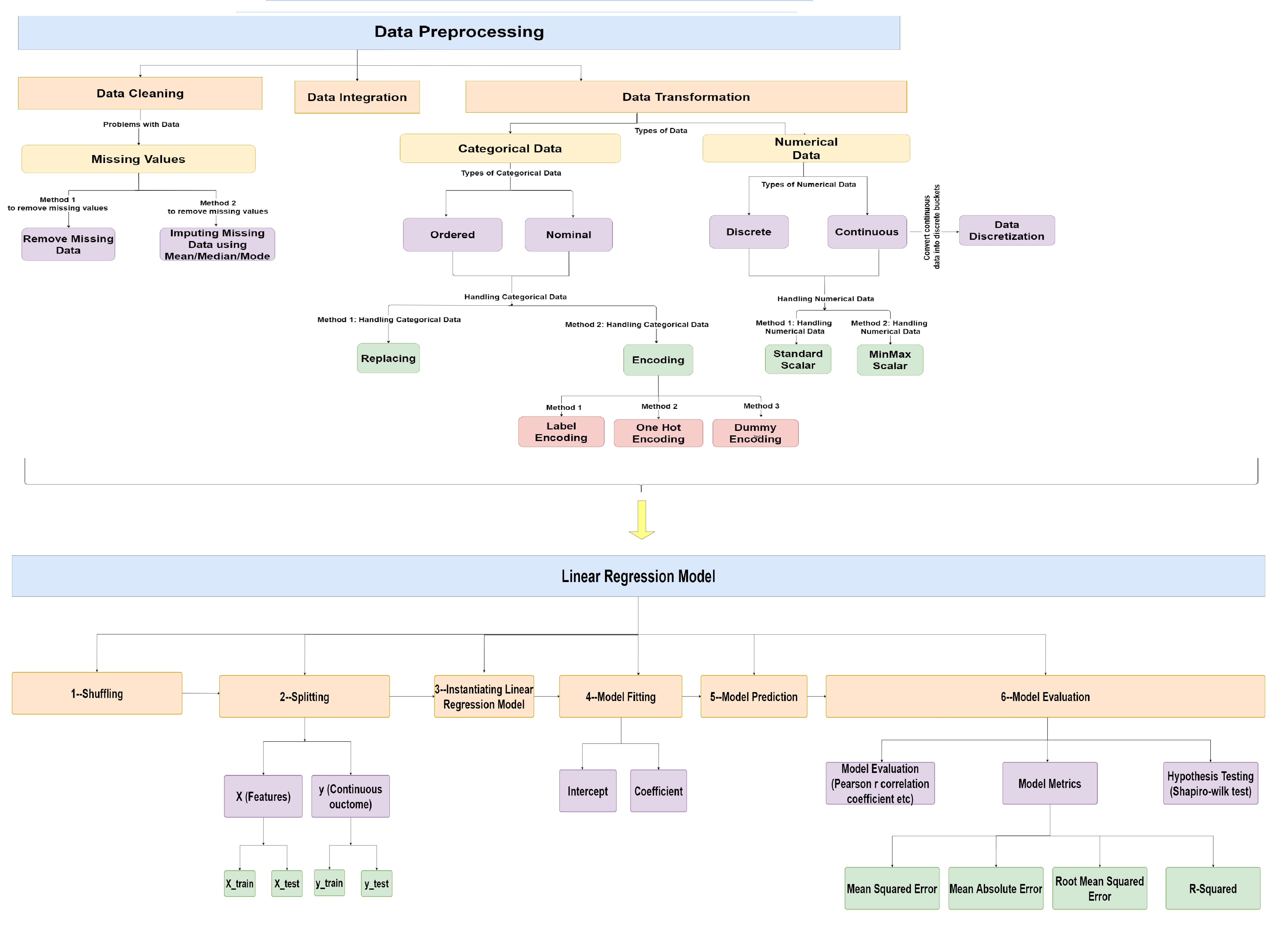 Before getting into detail of Linear regression and its types, let’s first understand what happens in Regression.
In regression, a single dependent or outcome variable is predicted with the help of one or more independent variables.

Below are few examples of Regression:

The most common choices for predicting such outcomes are linear and logistic regression. These are preferred mostly because of their transparency of interpretability. They could also be extrapolated easily to the value which are present in the training data but don’t seem significant to the user even if they are.

So, in case of Linear regression, it is assumed that the relationship between the feature(s) and the Continuous dependent variable follows a straight line.

The formula for straight line is y =mx + c

The variables y and x in the formula is the one whose relationship will be determined.

Both the variables are named as below:

So, if we are given a particular Independent Variable x, the regression model would basically compute the results of c and m. This would minimize the absolute difference between the dependent variable and the predicted value.

There are two types of Linear regression that we will discuss in this post:

So, now let’s try to understand a bit more in detail about Simple Linear Regression

So how do we use this equation to make prediction ?

Given the value of x, the simple linear regression model would compute the values of m and c which will be used to minimize the absolute difference between the predicted y value and the actual y value.

Let’s take an example to better understand this concept:

We could also describe this relationship with the equation for a line, Y = c + m(x), where ‘c’ is the Y-intercept and ‘m’ is the slope of the line. We could use the equation to predict weight if we knew an individual’s height.

In this example, if an individual was 70 inches tall, we would predict his weight to be:

In this simple linear regression, we are examining the impact of one independent variable on the outcome.

If height were the only determinant of body weight, we would expect that the points for individual subjects would lie close to the line.

However, if there were other factors (independent variables) that influenced body weight besides height (e.g., age, calorie intake, and exercise level), we might expect that the points for individual subjects would be more loosely scattered around the line.

Before preparing the data for the Linear Regression model, let us first see what are the different features in the data and understand it.

The data that we will be using is a weather related dataset which consists of hourly weather measurements. Below are the features of the data:

Temperature_c: The temperature in Celsius

Humidity: The proportion of humidity

Wind_Speed_kmh: The wind speed in kilometers per hour

Wind_Bearing_Degrees: The wind direction in degrees clockwise from due north

Visibility_km: The visibility in kilometers

Pressure_millibars: The atmospheric pressure as measured in millibars

2. Explore the data to figure out which column is numerical and which is categorical data

3. As you could see above, the description column is the only categorical column. Let’s see how many categories it has.

4. As you saw above, the description column has 3 categories. To handle categorical variables we need to encode the value of the column. Before implementing the encoding, let’s understand the encoding technique that we are going to use.

Multi-class, categorical variables must be converted into dummy variables via a process termed “dummy coding” as we had discussed in the Data-Preprocessing Blog

5. The original DataFrame, df, consisted of eight columns, one of which (that is, Description) was a multi-class, categorical variable with three levels. Using the dummy encoding technique we transformed this feature into n-1 (that is, 2), separated dummy variables, and dropped the original feature, Description. Thus, df_dummies should now contain one more column than df (that is, 9 columns).

6. Before splitting the data into testing and training sets, it is a good practice to shuffle the rows of the dataset to avoid any ordering effect.

7. Linear regression is used for predicting a continuous outcome. Thus, in this exercise, we will pretend that the continuous variable Temperature_c (the temperature in Celsius) is the dependent variable, and that we are preparing data to fit a linear regression model.

8. Splitting X and y into testing and training data

Exercise 2: Fitting the simple linear regression model and determining the Intercept and Coefficient

10. Fitting the model to the Humidity column in training data

11. Extracting the value of Intercept

12. Extracting the value of Coefficient

13. Printing the formula for predicting temperature

Exercise 3: Generating Predictions and Evaluating the performance of the Simple Linear Regression Model

Now that we have extracted the intercept and coefficient of our simple linear regression, let’s go ahead and generate predictions and evaluate how the model performs on the unseen test data

14. Generate the predictions on the test data

In order to evaluate the model performance we can determine the correlation between the predicted and actual value using a scatter plot.

With a Pearson r value of 0.62, there is a moderate, positive, linear correlation between the predicted and actual values. A perfect model would have all points on the plot in a straight line and an r value of 1.0.

Hypothesis testing –Test for Normality of a distribution

To test the Normality of the distribution we will use the Shapiro-Wilk test.

1. The null hypothesis for the Shapiro-Wilk test is that data is normally distributed.

In this use case we will be using the Shapiro-wilk test to create a programmatic title which will tell the reader whether the distribution is normal or not.

The histogram shows us that the residuals are negatively skewed and the value of the Shapiro W p-value in the title tells us that the distribution is not normal. Therefore we will be rejecting the null hypothesis which says that our data is distributed normally. This gives us further evidence that our model has room for improvement.

Mean absolute error (MAE) is the average absolute difference between the predicted values and the actual values.

Mean squared error (MSE) is the average of the squared differences between the predicted and actual values.

Root mean squared error (RMSE) is the square root of the MSE.

R-squared tells us the proportion of variance in the dependent variable that can be explained by the model.

Thus, in this simple linear regression model, humidity explained only 38.9% of the variance in temperature. Additionally, our predictions were within ± 6.052 degrees Celsius.